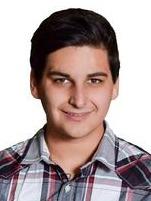 Jesse was hired as an intern from Rowan College at the beginning of the summer in 2015, and with his talent and work ethic, was hired full-time into the company and is now the Marketing Director at Dry Guys. Jesse was first introduced to Adobe’s design programs in his sophomore year of high school and has been striving to be a full-time designer ever since.

Though his focuses are on designing, Jesse also has discovered a passion for photography and has been put in charge of capturing images to be integrated into the Dry Guy’s server, website, and advertisements.

In his personal time, Jesse enjoys spending time with friends and family and walking his 3 Siberian Huskies. He also enjoys attending concerts and collecting records- with some of his favorites being Silverstein, A Day To Remember, and Senses Fail. Jesse also considers himself a technophile and is always quick to lend a technological hand!

Jesse graduated from RCGC in 2016 with a degree in Applied Science, which he puts to good use by helping the Dry Guys Team strive further towards our goals. We are extremely happy to have his talent on our Team!

Back to Previous Page Back to Meet The Team

We serve the following areas